I decided to limit the number of posts I put out, thinking that perhaps the people who read them had reached overload with the dark and hopeless situations I photograph. It was never meant to be ‘pretty’ but reading the blogs of other photographers who fill their ‘space’ with joy, hope and beauty I was beginning to feel like the boisterous, drunken neighbor who has gatecrashed a Brady Bunch family BBQ. That does not mean I have stopped photographing the streets of New York City just that I have been keeping the images to myself. Then I came across this man. At 51st and Lexington he trotted up and down the entrances to the Subway. Down the stairs, up the other side, across the road, down the stairs, up the other side, across the road …. An endless, circular, pointless march. A path that made me think of the behavior some captive caged animals display when ‘stir crazy’ kicks in through being deprived of their natural environment. So I followed him, now there were two of us rising above and falling below the streets of NYC. He always avoided eye contact with anyone who stood in his way and waited patiently, almost apologetically, giving them the right of way until he could continue the quest that only he could understand. Blank faced and dead eyed. His skin looked burnt, like a charred pepper, it was years of accumulated filth and grime ingrained from sleeping in the doorways and back alleys of the city. I can only imagine his story, the road he has traveled that brings him to this point in his life, I have a feeling that just scanning the highlights of it would give most of us a few sleepless nights .

I love (‘love’ is probably the wrong word, I hope you know what I mean) the body shape in this image. So tired and weary, his head tilted down depicts total desolation and despair for me. A hopelessness that mirrors his awkward limbs and the tight grip on the handrail that stops him falling, although I fear that falling is something close to familiar in his world. I left him to continue his compulsive journey wondering at what point he gives up and moves somewhere else, if indeed he does. This could be it, the perpetual circle he travels every waking moment of every day. I will look for him the next time I pass this way.

I guess I will never lose the amazement I find in the sheer volume of people living on the streets here. They are not hard to find and I never set out with the purpose of photographing them. They are everywhere, like moth-eaten clothes pegged out on a frayed rope, alone and exposed to whatever the elements throw at them. It strikes me as I am writing this that I rarely see groups of homeless people together. Apart from lines at hostels and soup kitchens they are almost always alone! I suppose that begging in two’s or three’s is obviously a non starter, the trauma of being surrounded by a group of homeless people shaking cups at them would make most people run for their lives. But not all homeless people spend their day begging. The man above did not once ask any passerby for anything, nor did any of the good people of New York he came across offer a few dollars without being asked, despite the obvious horror of his situation and why should they. I did (I’m not looking for a round of applause here) and he took it and nodded without looking up. Below are some other images taken on the same day. 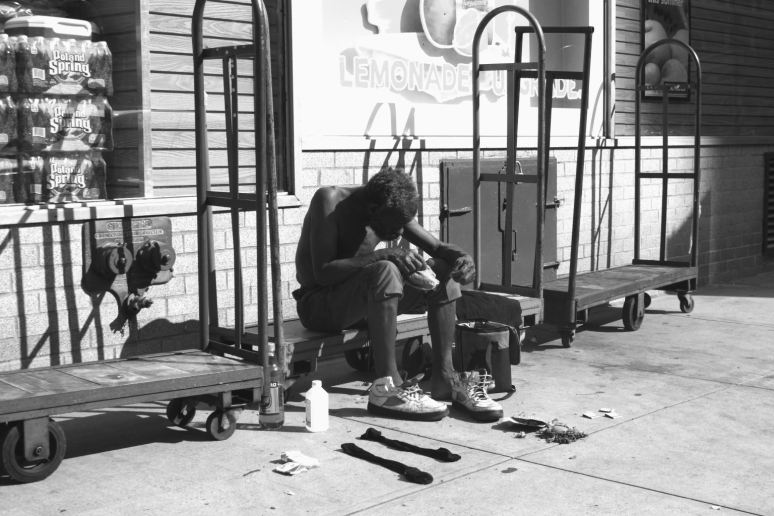